Wow, I can't believe how late we are on another pregnancy post. My apologies, to any of you who are trying to keep up with us! 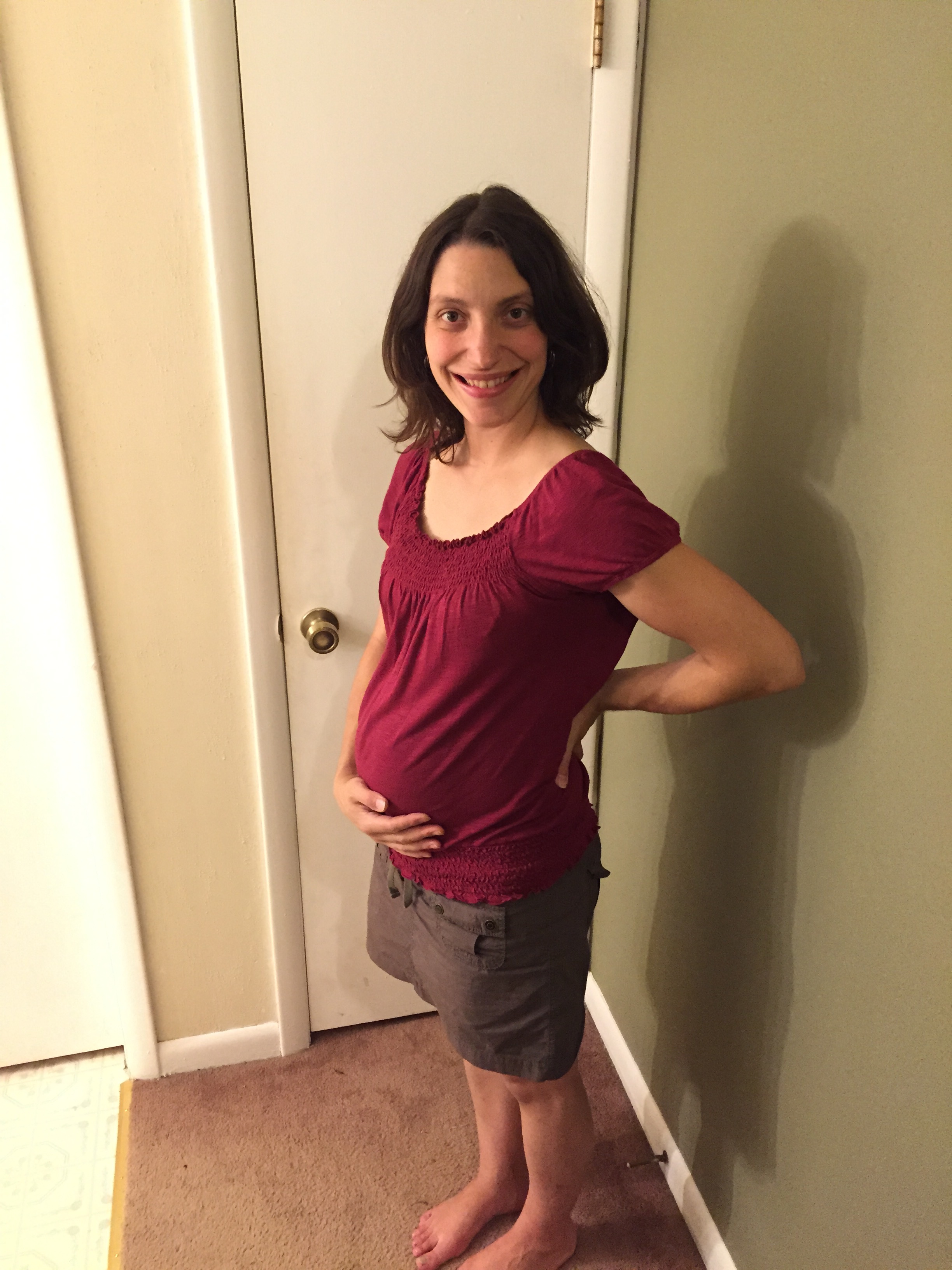 How Far Along: Recapping week 29. (Picture taken at 29 weeks 6 days pregnant). It's not the best picture of me, but it was one of those spur of the moment pictures, when we realized we were off to bed and hadn't taken a picture all week. Isn't my belly getting so round?!

How I'm Feeling This Week: Finally feeling like we are experiencing a normal pregnancy. Between the great news we received from our doctor last week, and having only a normal amount of contractions, both Nick and I are really enjoying this period of having a lot less to worry about.

Braxton Hicks Contractions: Only normal pregnancy amounts. This is awesome, and we hope it keeps up!

Aversions: Nothing this week. 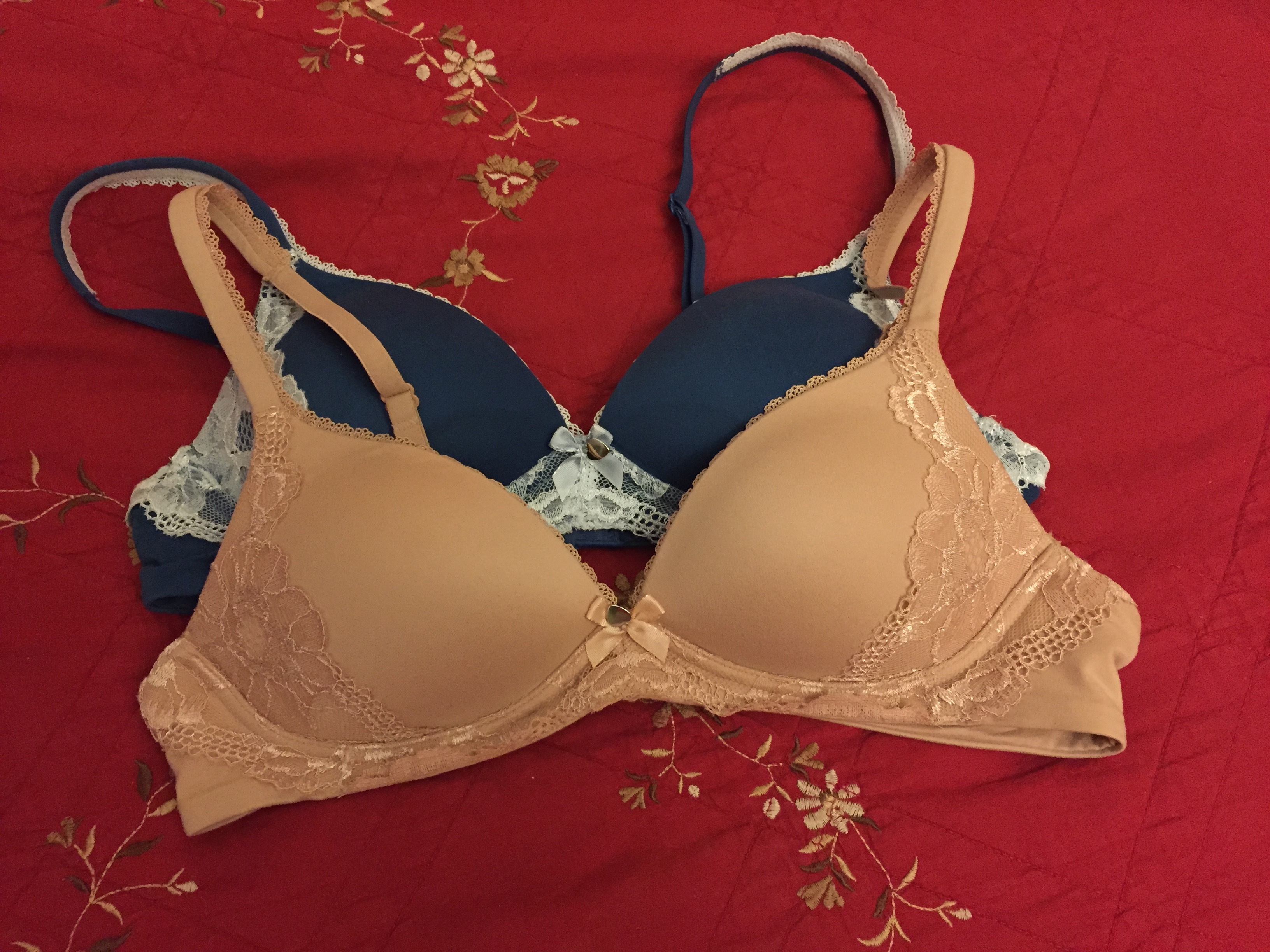 With my larger cup size due to this pregnancy (going from AA to A), I had 4 near accidental times this week where my bra wasn't containing everything it was supposed to! Thankfully I caught the mishaps before anything embarrasing happened, but Nick made sure to buy me 2 new bras from Victoria's Secret since they were having a sale this past week.

Nick bought me my first Victoria's Secret bra as a Valentine's Day gift when I was pregnant with our second son and needed some comfortable underwear. We didn't have a lot of money at the time, so it seemed like an expensive gift, but it was a smart purchase! That first bra has been used for 3 years now and still has maintained its shape. Since that early experience, I've boughten a few other cheaper bras that would wear out within a years time of use, but now instead, I keep returning to Victoria's Secret for my undergarments since they last well and are far more comfortable. In the future, I might write a review about Victoria's Secret on their line of bras, underwear, and clothing.

The Body by Victoria line carries bras that have no underwires, but still have support as if there was an underwire, so I decided to get some of those style. And I LOVE them. They are incredibly soft and comfortable, that I completely forget that I'm wearing them. Plus, without the underwire, I'll easily be able to use the new bras for breastfeeding once the baby is here.

Doctor/Midwife Appointment: None this week. 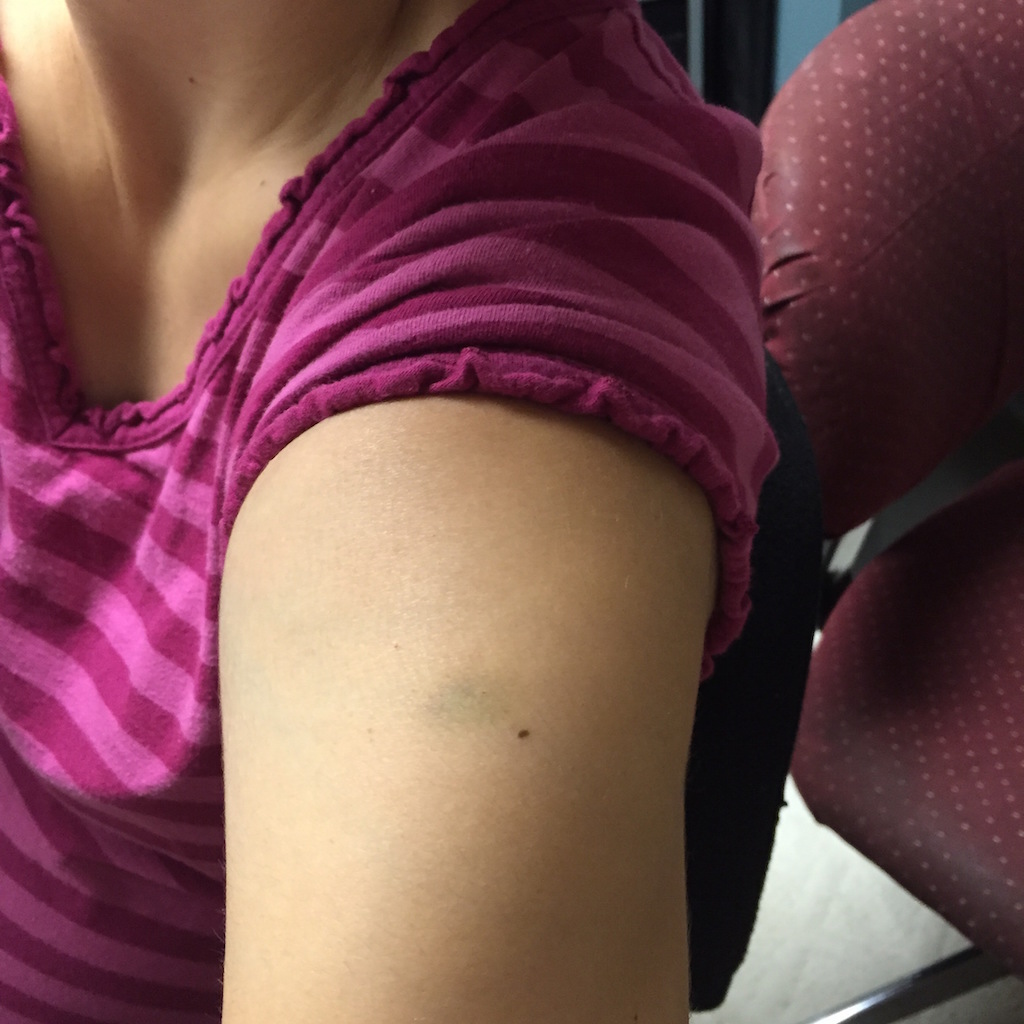 17P: Had my tenth 17P shot this week. Ten shots down and 7 more to go! The shot I received last week, left a nasty bruise on my arm that is still there. Not sure why some weeks the shots leave no side effects, and other weeks there is something residual that my body deals with. These shots are for progesterone, helping my horomones balance better to hopefully carry this baby to full term (37 weeks). I will receive the shots until I am 36 weeks pregnant.

Weight Gain So Far: Now that I'm in the third trimester, I'll be allowed another 100 calories (added to the 300 calories I was allowed in the second trimester) if I'm hungry. I'm already eating about 2,250 calories each day, and I'm using the My Fitness Pal app. to help me keep track of my eating habits.

If you'd like to see my diet, you can look me up and I'll add you on my friends list. I'm listed as horseopeaceranch.
For the third trimester I'm supposed to add 400-500 extra calories to my regular diet each day, which translates to about one peanut butter and jelly sandwich with maybe some carrot sticks on the side.

Food Cravings: Berries and orange juice at the beginning of the week, and later in the week my craving was for root beer. Turns out, in the third trimester, you are supposed to eat a lot of the foods that a pregnant body needs in the first trimester (broccoli, berries, orange juice, kale, etc.), so with eating intuitively, it wasn't a surprise that these were the foods I was craving again. 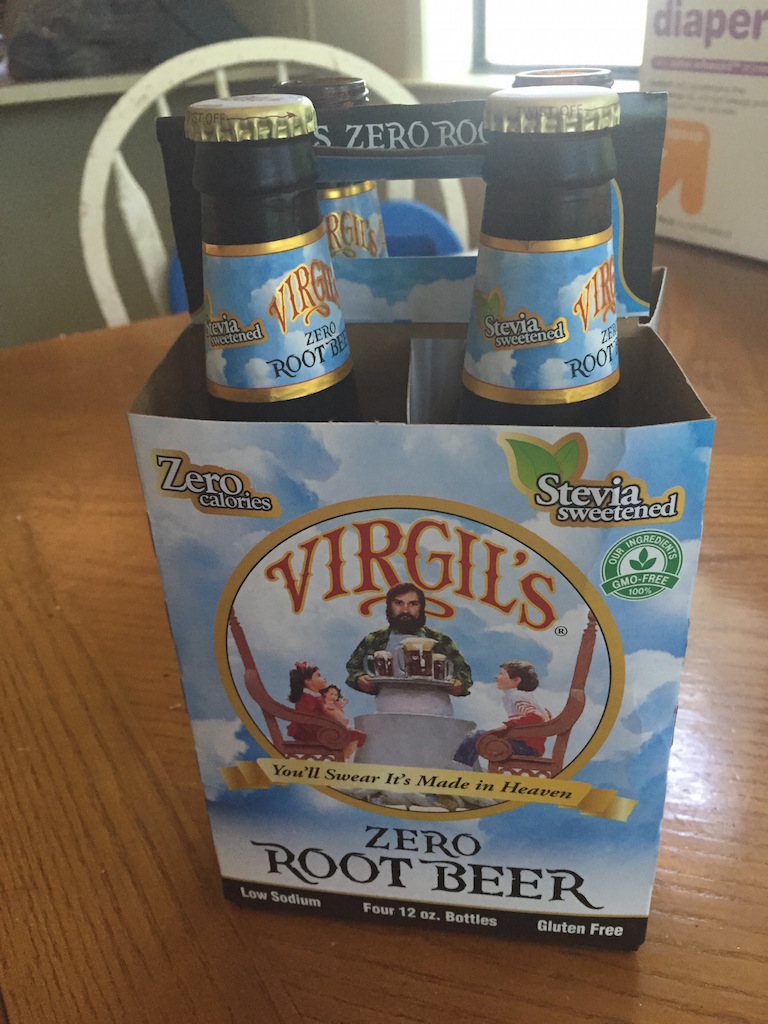 The root beer craving was interesting. A year ago this month when I was pregnant with the baby that I miscarried, I had craved root beer. Both now and then, I wanted a root beer float since it is a great summer time treat. Last year when I had the craving, I tried this 0 calorie root beer that I found at Whole Foods, and it was surprisingly good. I say surprisingly, because I don't normally like foods/drinks sweetened with stevia since it leaves a sweet after taste, but this brand of root beer didn't leave the after taste. So, not only is it 0 calorie (great for calorie counting!), but it is also naturally sweetened! Win win. And, I quenched my craving by leaving the ice cream out and having only the root beer, which was another plus for my calorie counting. (But then, when I didn't gain any weight this week, Nick said I should have taken advantage of the craving and had it with ice cream, haha!)

Regular or Maternity Clothes: All maternity bottoms now, and some regular sized shirts. I feel most comfortable in maternity shirts, instead of just extra long shirts or stretchy shirts, because they are made specifically for the pregnant body. Imagine that! But, I only have 3 maternity shirts, so they get worn a LOT! I'm also enjoying my summer dresses (stretch materials) and skirts in the almost summer heat.

Missing anything: I'm just going to be completely honest here, and admit that I'm missing love making with my man! With the report of a short cervix in week 14, and being told to go on pelvic rest, I know that this pregnancy is going well in part to the fact that we have withheld ourselves from each other. This has been extremely tough on us. But hearing that my cervical length is now normal, I know that we have done the right thing for this pregnancy.

Boy or Girl: Ugh! It's getting harder and harder as the weeks progress to have Nick know the sex of the baby, and me not knowing until the end. It's a unique situation, one that we never dreamed we'd find ourselves in, but we are happy in our individuality and this is what we each wanted in this pregnancy. As a married couple that talks about EVERYTHING, we cannot wait till this baby is out and not have secrets between us! But Nick is great at keeping me guessing, and unless I get to the point where I can't stand waiting to find out any longer, I'm satisfied with my decision to wait till the end and I get to hear, "Its a ______!"

Baby's Chance of Survival this Week: 90%.  Same as the last  few weeks.

Baby Movement: This baby now has normal patterns through the day when he/she moves. We love feeling the baby parts that are readily felt now just underneath my skin.

Size of Baby: While all the internet sites say our baby should be around 2 1/2 pounds now, our doctor said this baby is already a few ounces over 3 pounds, when we had our ultrasound last week! The baby is about 15" long, or about the size of a butternut squash. 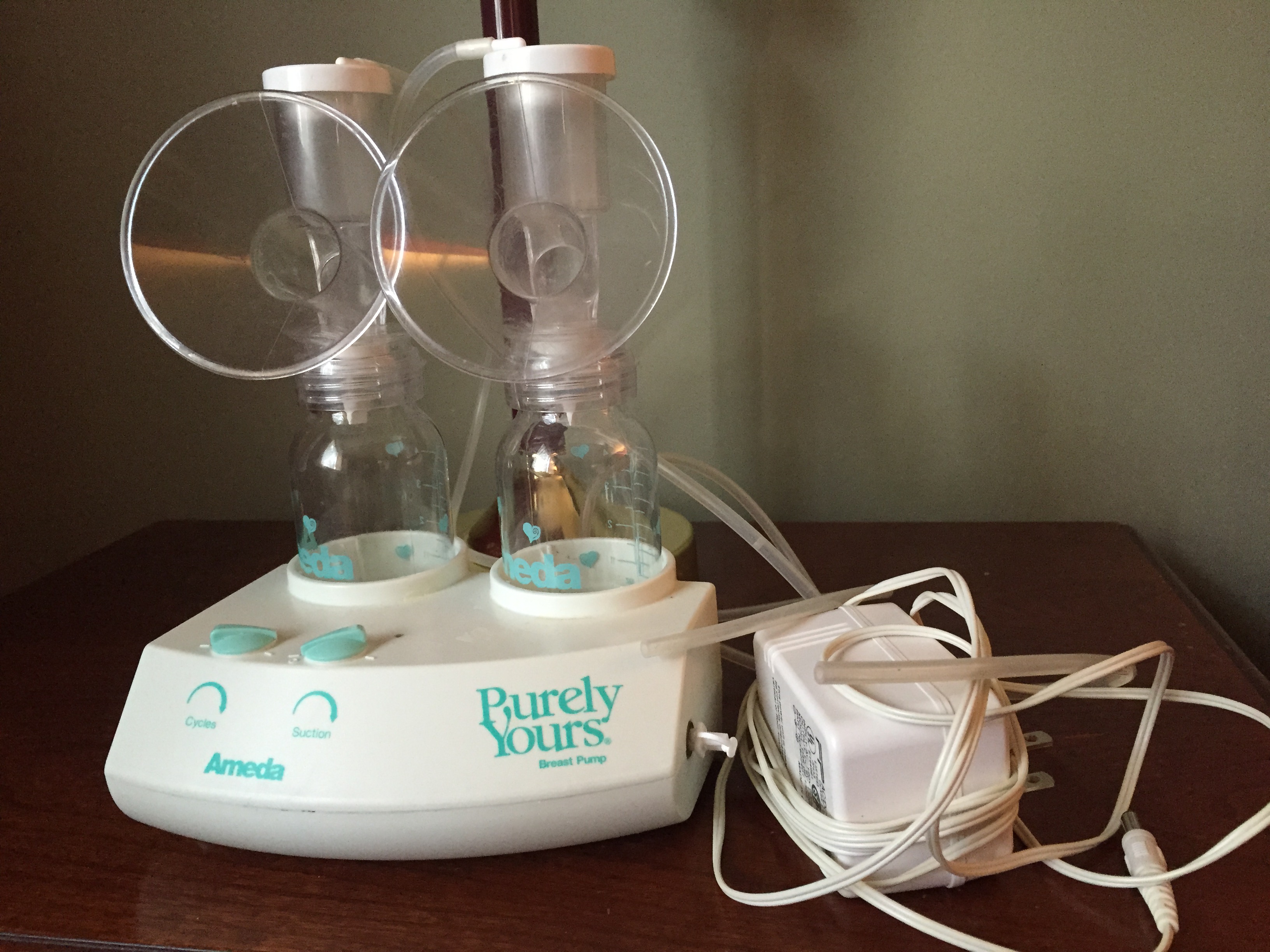 What I Did to Prepare for Baby's Arrival: I slowed down on the nesting this week and got back into a normal routine of getting 900+ soaps made, but I did find time to pull out the breast pump I'll need once the baby is sleeping for longer periods at night. I made sure all the parts were cleaned, and had to replace one of the rubber pieces that had broken since I last used the pump. The breast pump I have, was given to me by a good friend of mine just before I had our last son, and it worked better than the breast pumps they had in the hospital! It is an Ameda brand, which I'd never heard of, but it is top of the line fantastic! I'm so grateful to have used it with our last son when he arrived 5 1/2 weeks premature, and I wasn't able to nurse him for the first 10 days after he was born. It kept up my milk supply wonderfully. I have a love/hate relationship with pumping milk, but it is nice to have some in the freezer in case we want to go on a date night, or to have extra during the weaning phase.

Pregnancy Thoughts this Week: It isn't something that is heavy on our minds, but something that we discuss each pregnancy is how I might not make it through childbirth. This is the topic that came up this week. While it is rare to have a maternal death from child bearing in today's world of amazing medical awareness, it is still real. I know that it's not something that can be helped, if something goes wrong, and Nick can't stand the thought of losing me, but my life and it's path is in God's hands and we rest in that.

Create an account with us and you'll be able to:

Fill in your email below to request a new password. An email will be sent to the address below containing a link to verify your email address.